Getting older is a double edge sword. On one hand I have more hair on my chin than my head, my knees and ankles crack as I walk and my short term memory is shocking to say the least. However, it does give you a wider (if not somewhat sketchy), sense of time and long term planning.

Recently, I spotted my High Elf shadow warriors on my shelves, remembered writing about them "a few weeks ago" on the blog, then wandered off again, probably distracted by something mundane such as employment or the need to find sustenance.

I have been following the tale of four Oldhammerers blog posts on the web, enjoying reminiscing about the original TOFG in White Dwarf and remembering how I had been following along at home. A thought then struck me, I could follow along with these gentlemen at home and maybe even reach my lifelong goal of having a well painted full army. The goal I had missed first time round by starting one army, changing on month 3 and never catching up. Maybe this time I would succeed?

It was at this point I realized that I was already behind as they had started in September and it was now December. To catch up, I was going to have to get organized quickly and and maybe increase my monthly point count but I was sure I could do it! The challenge was set, 1000 points by August and I knew I wanted a High Elf army, so I opened up Warhammer Armies and quickly thrashed out an army list:

I adhered to my own limitations of <25% characters allowance and >50% units allowance. I firmly believe Warhammer should be about units and not heroes which this restriction represents nicely. The Spell Bard would be the figurehead leader due to looking more dynamic and important on a fine steed but practical leadership would most likely come from the hero on foot. I wanted variety in the units where possible so went for 1 unit of melee infantry, 1 unit of ranged infantry, 1 unit of skirmishers and a unit of melee cavalry. This gives me a nice rounded force to take on all comers with that should be fun to play with and to me seems quite elfy.

This activity reminded me that one of the great strengths of  the High Elf army list is that it has no compulsory troops choices, so it lets you choose more or less what you want. Which is neat and makes life easier on the leadpile and therefore my wallet.

With my army list in hand I headed to my leadpile to see what I could dig out. A quick search revealed:
20 metal sword masters,
15 lothern seaguard in a horrible state of paint after being purchased off ebay some time a go,
5 Silver helms,
16 metal archers
and a hero on a horse.

The swordsmen were quickly thrown back as their weapons did not represent halberds in any way shape or form, the mounted hero went back too as it was of no use to me. This left me with Seaguard to represent my Elven guard, which their heavily bladed spears could do in a pinch, all the archers I needed and most of the cavalry too. I then remembered the shadow warriors on my shelf that I had blogged about "a few weeks ago." It turns out that a few weeks was in fact over a year... Amazing how time flies isn't it? So after my first sift, I had the majority of my units but no characters. Ho hum, I will have to shop around a little to find something suitable but still, it was a solid start.

Mounted mage: It seems to be nigh on impossible to find a nicely done, mounted female mage. I have Googled until my eyes bled (slight exaggeration) and even asked the Mrs to help me look. The only model I actually liked is from GameZone miniatures, it from their faux Bretonnian range but is genuinely a thing of beauty. Sadly it is also almost impossible to buy, even the vendors own website would not allow me to purchase it. I will, however, persist as I now have it in my head that she would be perfect. If anyone knows where to get it please let me know. 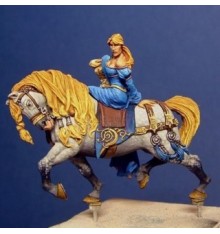 Hero on foot with a nice big spear: Fortunately there are quite a few of these about, I will most likely use a converted version of this fella or the crewman from the old Tiranoc Chariot. I have wanted this miniature for years and think his antlered helmet will fit in nicely with the planned "natural look" of the army as opposed to the often used flames or phoenixes. (Edit: Ooooh or maybe a maiden guard) 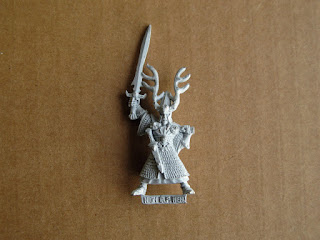 Units: I also need 2 more Silver helms, 1 shadow warrior and 2 more seaguard. Blimey, Seaguard can be expensive on EBay these days! 20 quid for 4 miniatures seems a piss take when I bought 15 for £25 not so long ago. Still, patience is a virtue and I am sure there are still bargains out there to be had, especially as I am only looking for 2.

To hit my targets I cannot mess about painting bits here and there then panicking because it is almost August. No, this way is my usual route and its destination is failure. Instead, I drafted up a painting plan, separated in to 8 sections (no particular order), one each month until the target. I already have 4 painted Seekers and one Silver Helm so they do not need to be on the list.

This should leave me with needing to paint on average 7 models a month or a big spangly character, a feat that even I should be able to accomplish...maybe. Well I will try anyway. Whipped up with enthusiasm for the project, this is exactly what I did. In quick succession I painted my first 2 archers and 2 Elven (sea)Guards. 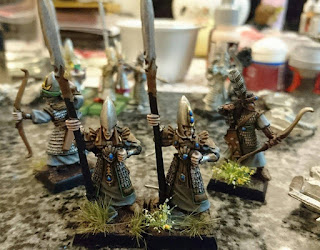 Since taking this picture, I have almost completed a third (sea)Guard and half completed the units standard bearer. You may notice that the spear shafts are black and a bit messy. This is down to my indecision on how to best proceed, I put up a plea on the Oldhammer Facebook page for advice and was met with a wave of sagely wisdom, many good ideas and smutty comments. I have decided that I want to see what the unit look like as a group before deciding a colour, they may even stay black but we shall see.


I intend to buck my usual tend of getting distracted and actually stay the course with this project. I am hoping that by publicly declaring it I will not suffer from waning enthusiasm as quickly as I usually do...