A tale of Oldhammerers Play Along: Update


Holidays are brilliant. I get to sit on my arse while painting and listening to Motorhead very loudly. Good times never last for long so I am enjoying the time I have before I go back to work.

Painting time has helped me hit my targets for my play along at home, much to my relief. By this point, in all honesty I had expected to fail; just another project started with enthusiasm and left alone within days. There is a long way to go of course but its a solid second step.

5 Elven guard with a standard bearer is 84 points

2 Archers are 28 points, bringing me to a total of 112 points painted since the 19th of this month.

To say I am pleased is an understatement, maybe some semblance of willpower is beginning to manifest itself in me after my first couple of decades of dicking about.

These guys join 4 Seekers (72 points) and a Silver helm (37 points). Bringing the grand total to 221 points. Phwoar, I am sure the collective hoards of the Warhammer world are having their underwear menaced by the mere thought of them. Maybe not. 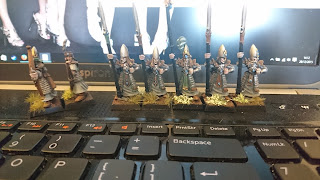 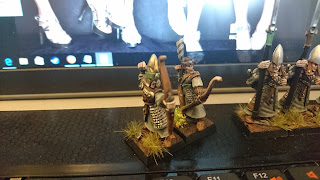 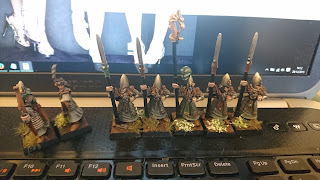 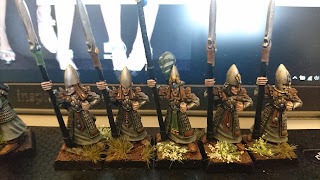 Hmmm, so photography is quite a skill. A good picture can really present a miniature to its best. Sadly my camera skills could be considered in need of improvement at best and down right shoddy if reviewed honestly. The best pictures I could get off my phone involved daylight from the front and a backlit screen from behind.... not exactly professional but hopefully it gives an idea of what these guys actually look like. My phone seemed to especially enjoy picking up all the dust and rogue static grass on my laptops chassis and in many other pictures did its best to ignore the miniatures completely.

For the next batch, I will try and get a more advanced set up prepared after calling upon the knowledge of a mate who knows a darn sight more than I do.

One of the best aspects of doing anything is the opportunity to learn and improve as you go along. Even in seven miniatures, I feel I have improved in some aspects and learned valuable lessons in others. The way I produce skin has improved steadily, my mixes are getting closer and more sympathetic each time. The last guardsman I painted being my favourite in that regard. 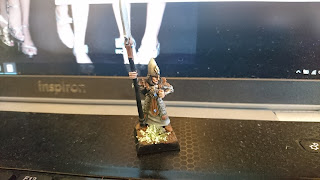 I also learned that the material bit on the spear looks shite in green. The one Guard painted like this may well change but for now, I will leave it as a cautionary tale to myself.

An old White Dwarf also yielded a gem painting tutorial which I have followed on the last two Guards and they are a massive improvement. I may well go back and update the older miniatures.

Up next will essentially be a ditto, 5 more Guard and 2 more Archers. A bit bland but important for several reasons; firstly it allows me to get the Guard unit up to a minimum size unit according to Warhammer Armies, which for me would be one hell of an achievement. Secondly, it means in a following month I can bring an Archer unit up to a similar state.

As I have a few days left of December and enthusiasm to spare, I hope to find the Silver Helms lance and shield so that they can be painted up and attached. There might also be some greenstuffing to do to smooth out a join for him.